You probably couldn’t have missed the news that Gucci creative director Alessandro Michele would be leaving his role after almost 8 years. The announcement has become the most talked about in the fashion world over the past few weeks. Michele made Gucci one of the most popular and profitable modern fashion brands. He was the ambassador of androgynous style and made vintage-looking items and the flawed beauty concept popular. Today we’re looking back at Alessandro Michele’s best moments at Gucci. Keep scrolling!

During the Gucci Fall 2018 fashion show, the models were walking carrying replicas of their own heads instead of handbags, and the runway looked like an operating room. That performance wasn’t some Michele’s sick fantasy — the show had many underlying meanings. It referenced medieval stories of decapitated martyrs and represented the death of gender stereotypes. It also aimed to show that the it-bag concept was fading away — people don’t have to purchase certain luxury items to flaunt their status because fashion has become more than that.

For the Spring 2019 collection, Alessandro Michele took the childlike fashion trend to a ridiculous extreme and made us all recall how we dressed when we were kids. The outfits that looked like they were taken out of grandma’s chest hit the spot — Michele foresaw what the Peter Pan generation, his target audience, really wanted.

The Resort 2020 collection boldly supported women’s rights. The dress with a uterus on it became a highlight of the collection stating that modern women have a right to make their own decisions regarding their bodies, career, and personal life. 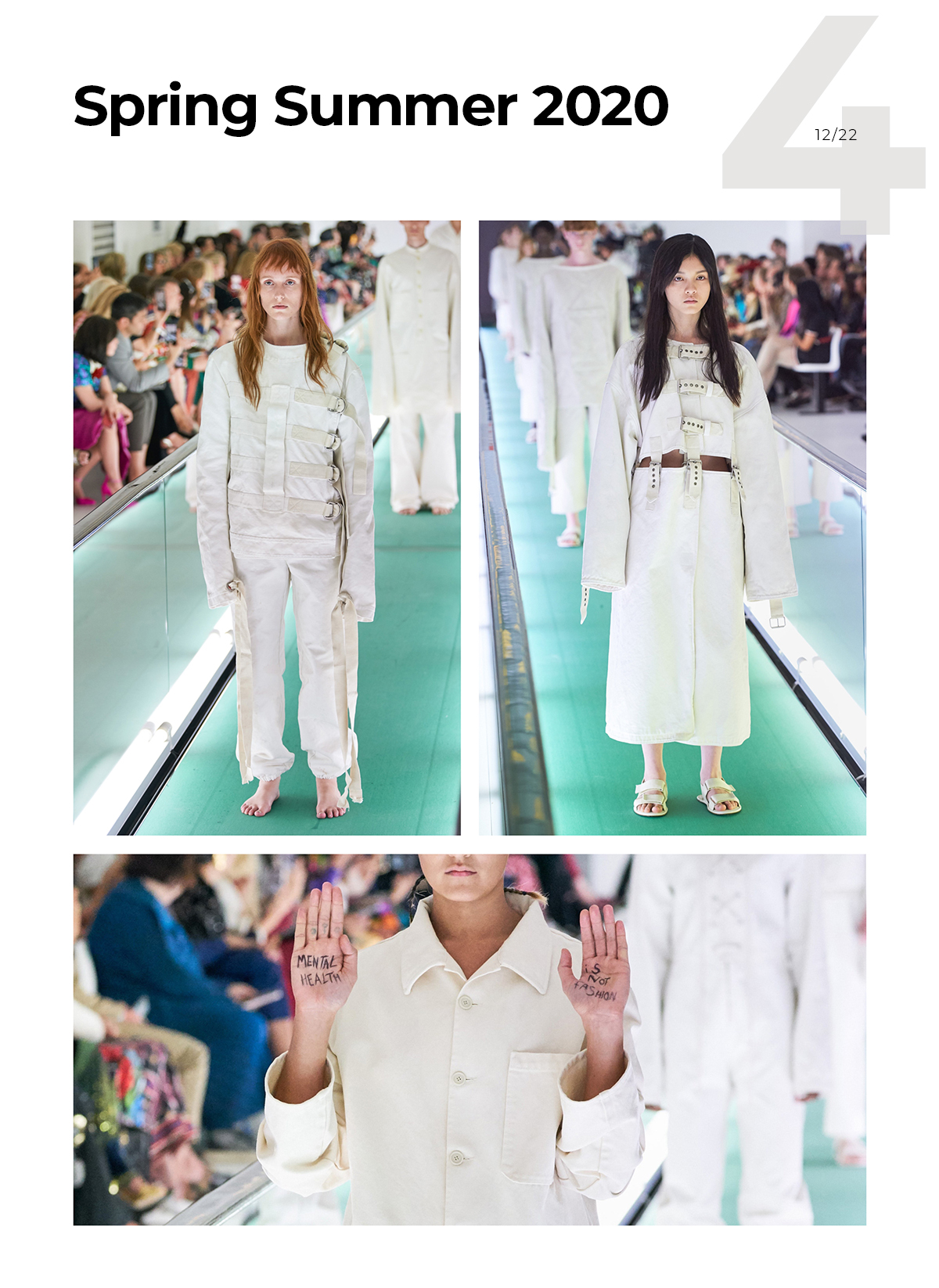 The Spring 2020 collection resulted in a scandal. It included straitjacket outfits that, according to Michele, had to represent restrictions imposed by society but the public found the looks offensive as it seemed like Gucci was trying to aestheticize mental health issues. One of the models, Ayesha Tan Jones, staged an impromptu protest while walking down the runway with the “Mental health is not fashion” statement written on their hands. 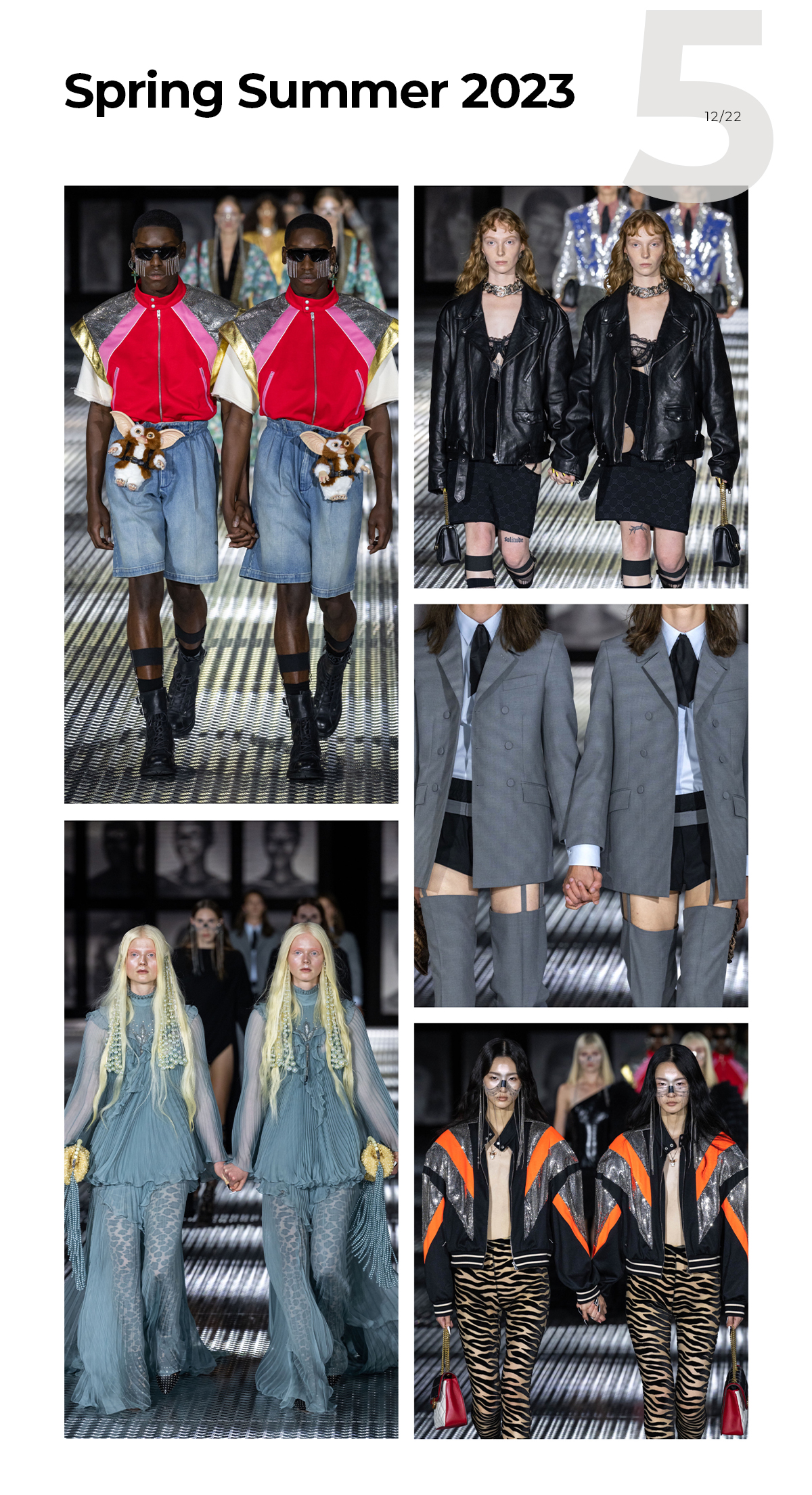 The twin parade on the runway during the last Michele’s fashion show for Gucci was the designer’s reflection on the identity and replication problem. It also had a nostalgic message — the collection was dedicated to Michele’s mother and her twin sister. 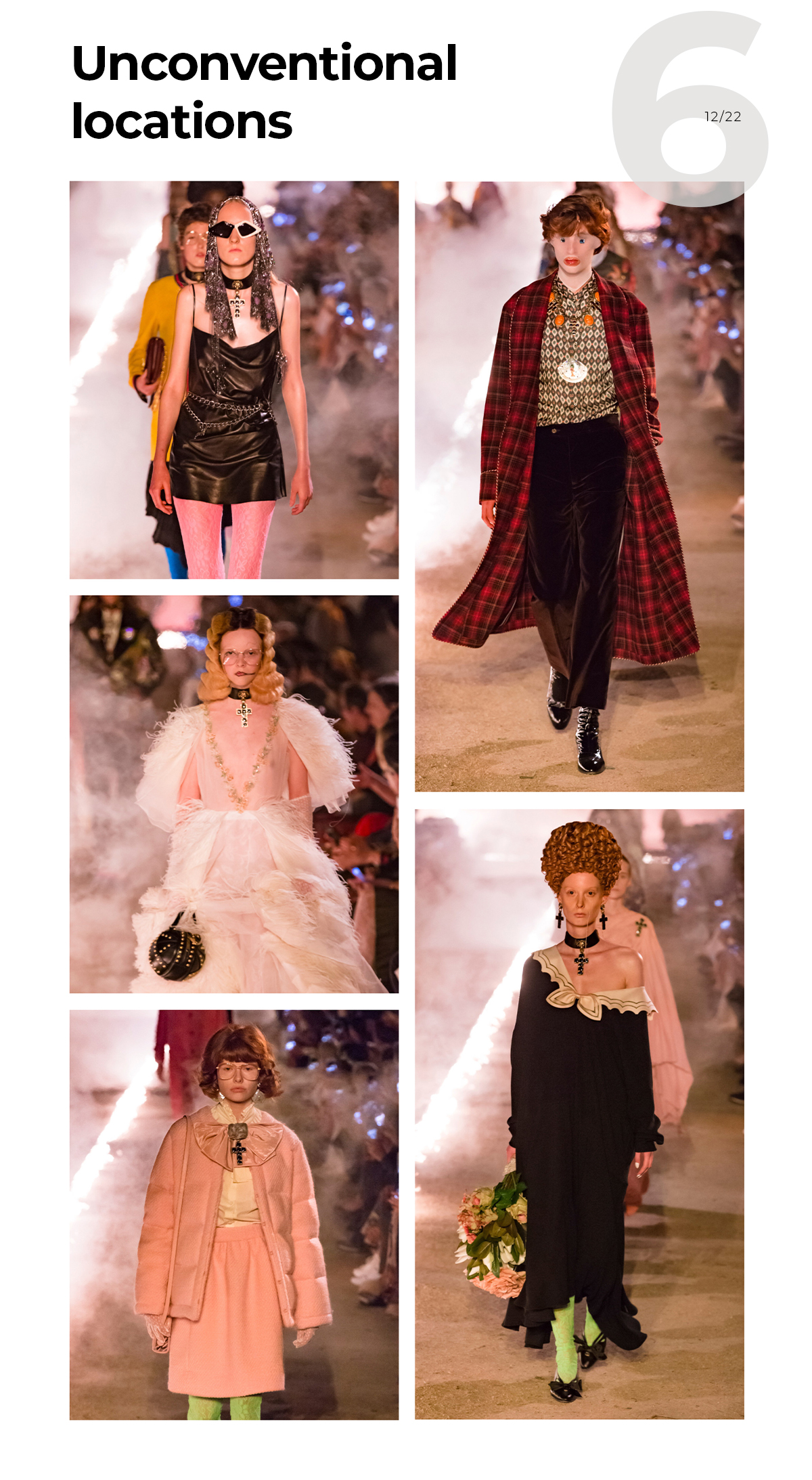 Alessandro Michele, among other things, sometimes would choose the most uncommon locations for the shows. For example, the Resort 2019 collection was displayed at the Alyscamps necropolis in Arles, France. The Pre-Fall 2022 collection that celebrated the brand’s 100th anniversary took place at the Hollywood Walk of Fame. And the Cosmogonie Resort 2023 collection was presented at Castel del Monte, a 13th-century castle.

So why did Gucci decide to part ways with such a successful creative director? No surprises here, artistic exhaustion and a drop in profits. The brand was oriented toward the Chinese market that went down during the pandemic. The collabs and collections became predictable and even boring. Moreover, the designer’s persona started to overshadow the brand. Alessandro Michele is an outstanding person and public figure who’s become sort of synonymous with the brand. It could also be a reason, perhaps?

Anyways, we hope that we’ll see Alessandro Michele’s new projects very soon. And it’s also curious to see what Gucci will offer next — it’s been fascinating to follow the brand for the past 8 years.

Read more about famous people in fashion in these posts:

Raf Simons, bomber jackets, and collab with a 19th-century painter

Demna Gvasalia – a genius or a hypist?

The world will remember her as a brave, audacious, and bright person.