One of the most anticipated movies of 2022 has just come out. We’re talking about “Blonde” – the new movie about Marilyn Monroe. Stream it or skip it – it’s for you to decide, but we sure think it’s a good occasion to remember the contribution she made to the fashion industry.

And this is not a coincidence because Marilyn Monroe was an icon of her time and made so many things popular. Keep scrolling to find out! 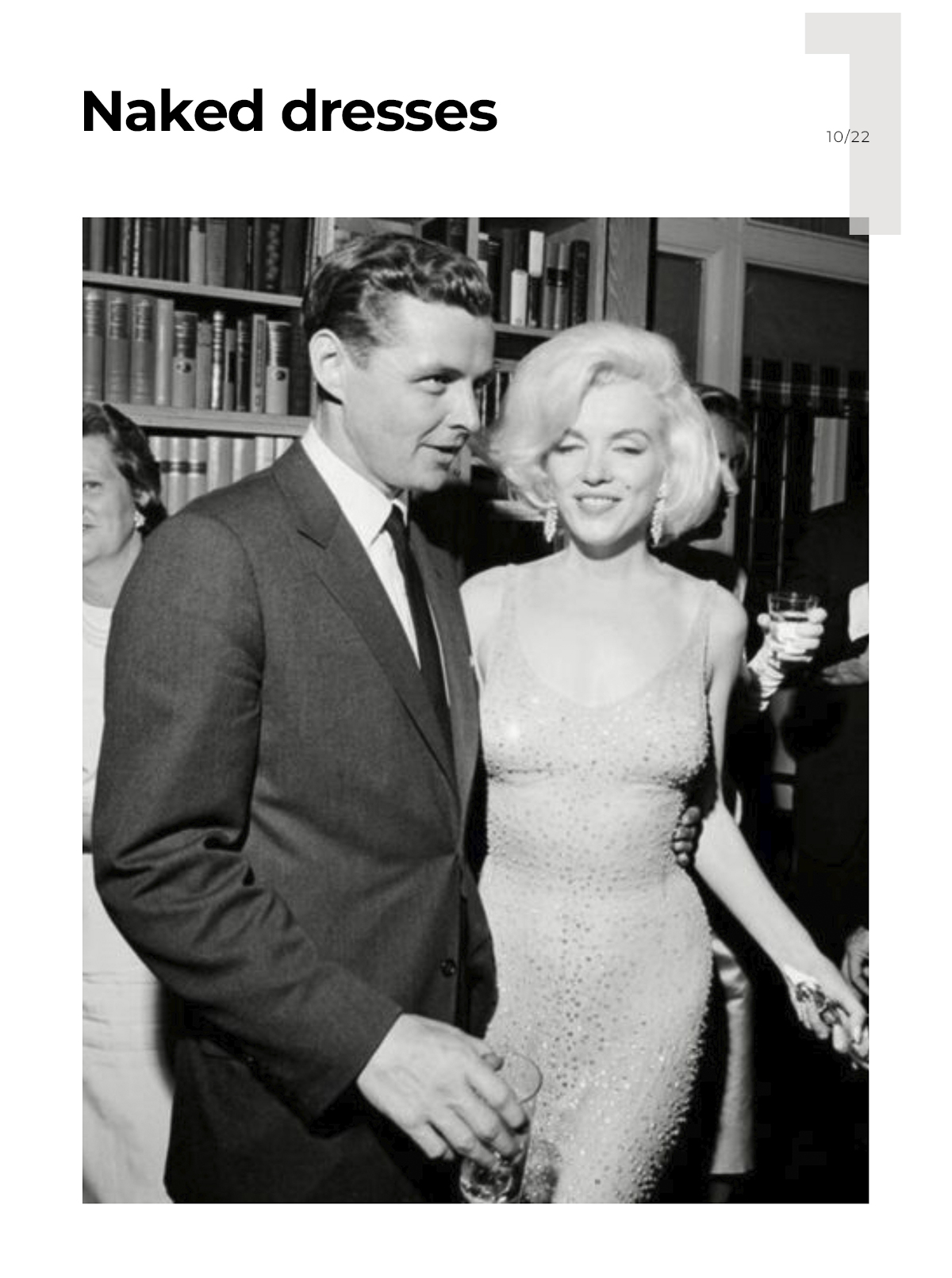 Probably everyone knows about Marilyn's naked dress. Sure, it wasn’t an invention at the time, but those 30 seconds she stood on stage in her naked dress to sing Happy Birthday to JFK changed fashion forever. Since then, celebrities keep making jaw-dropping appearances in naked dresses inspired by the famous gown studded with rhinestones. The naked dress for Monroe was made by French designer Jean Louis. 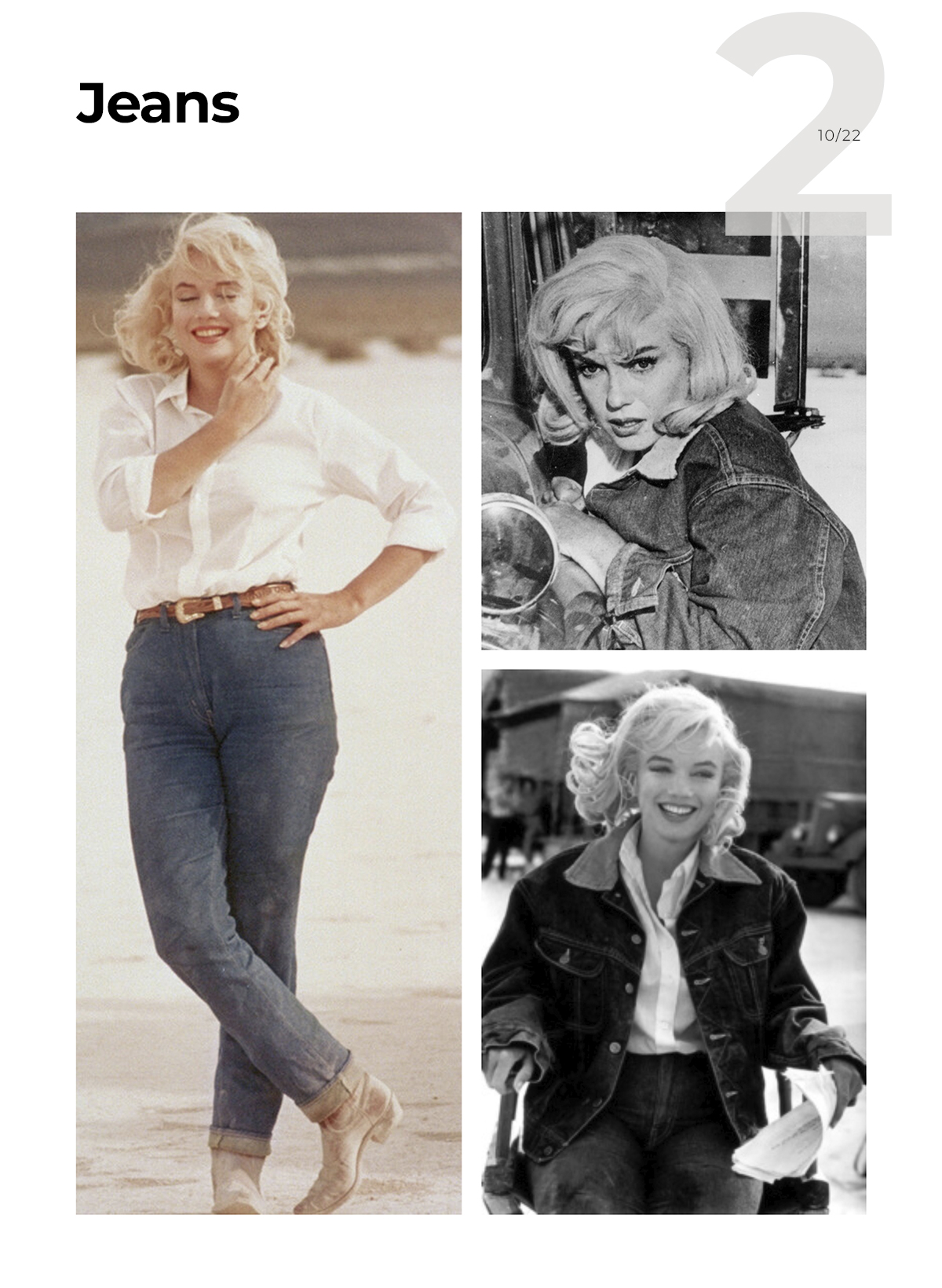 It was Marilyn who made jeans – a workwear staple – a trend for women. In 1961, the photographer Eve Arnold took a picture of Monroe wearing a jean suit on the set of “The Misfits”. She was wearing the legendary Storm Rider jacket by Lee. Back then, it was a mandatory attribute for any playboy. After the movie, women all over the US stormed the stores because they wanted to look like Marilyn Monroe. 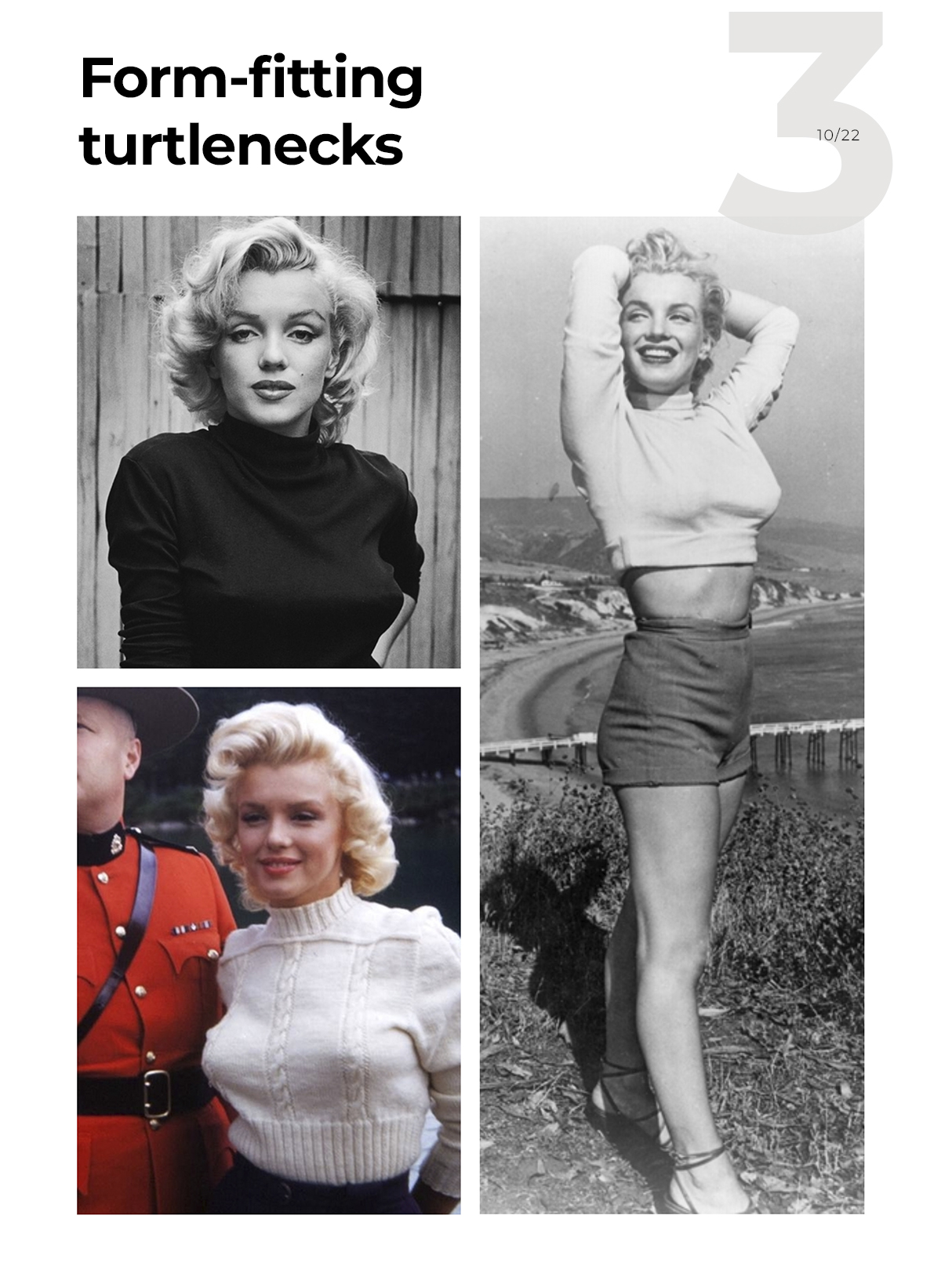 Marilyn loved to wear form-fitting turtlenecks and figure-hugging cropped sweaters. Her beige mock turtleneck sweater made it to the list of her memorabilia and was sold at auction in 2010 for $3000 even though it was almost entirely eaten by moths. 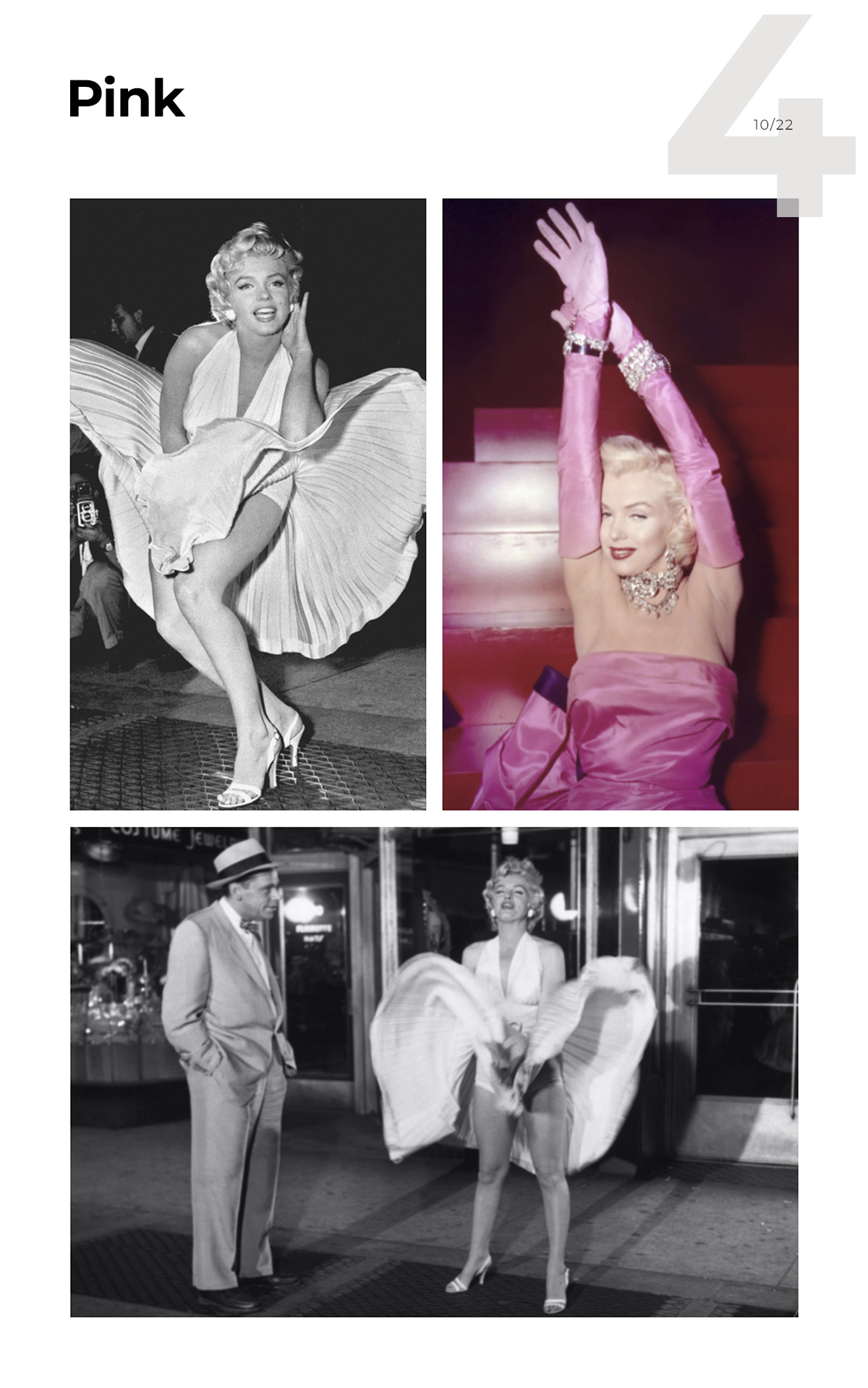 By the way, Travilla designed another iconic look for Marilyn as well – the white dress from “The Seven Year Itch”. Perhaps, this look is the most hyped above all. 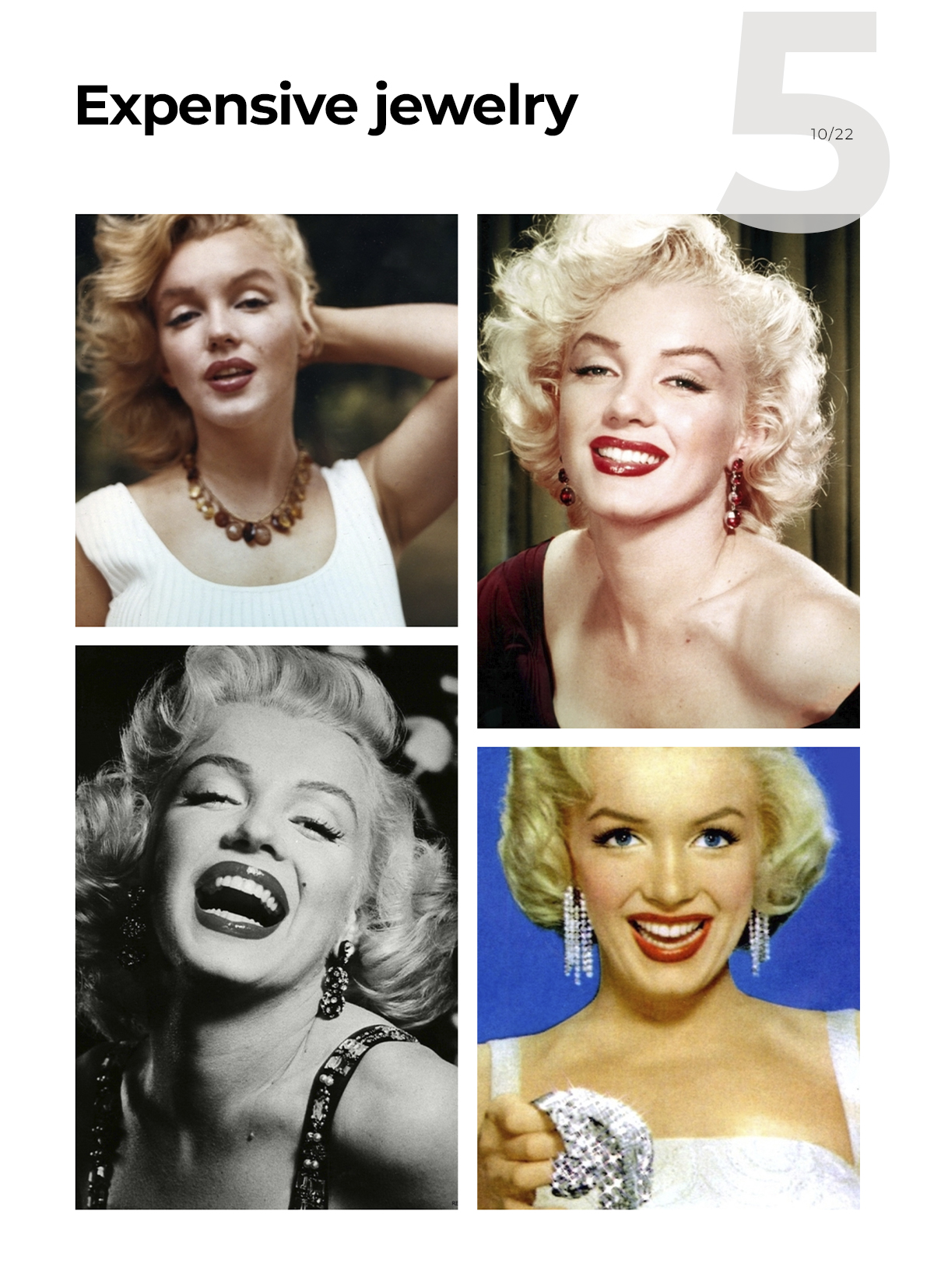 Marilyn wore fancy jewelry even with swimsuits. Her collection consisted of the Mikimoto pearl necklace, the infamous Moon of Baroda diamond necklace, the ruby necklace, and the gold and onyx necklace. 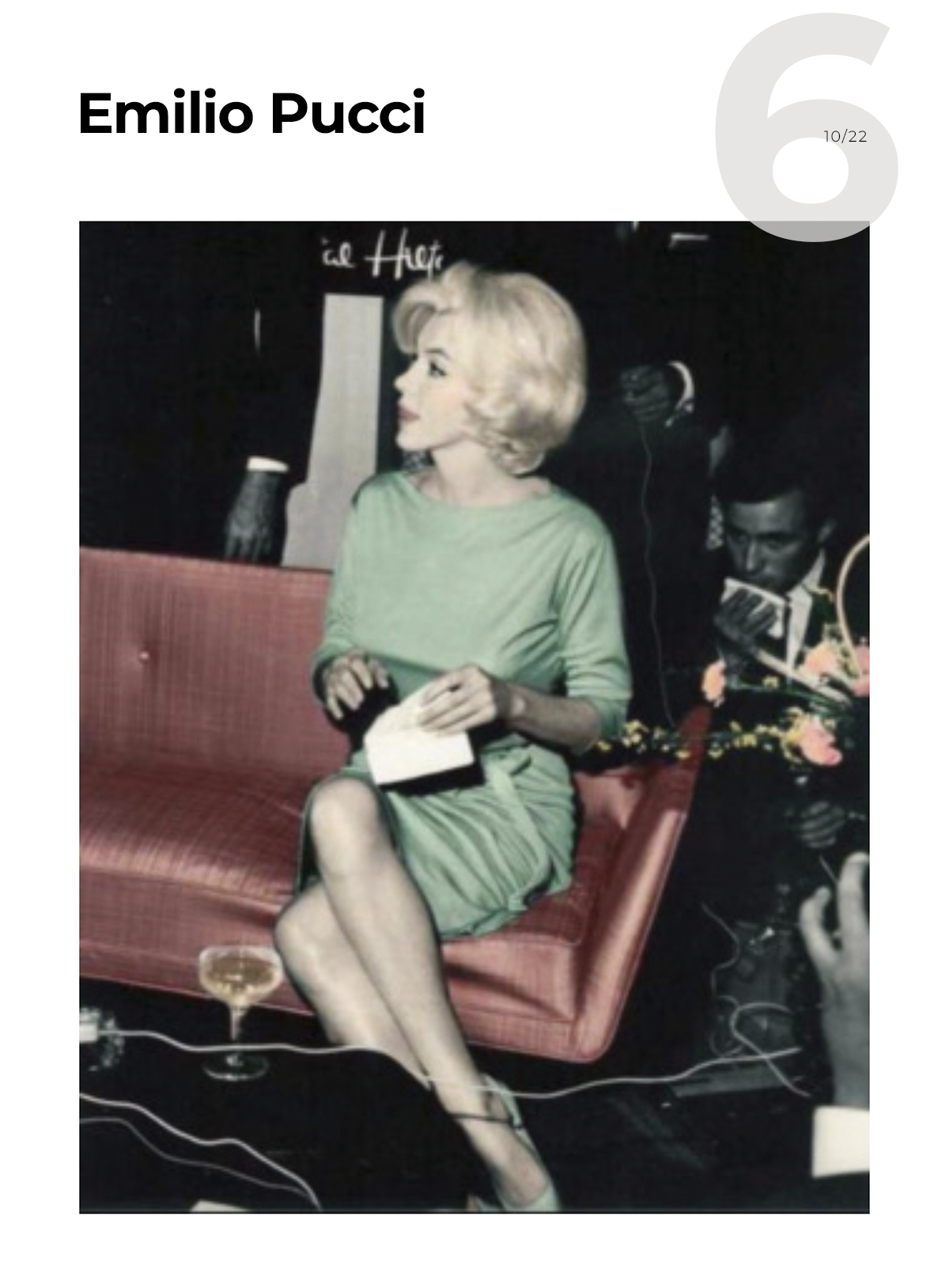 Marilyn Monroe had several dozen dresses by Emilio Pucci. However, the brand played a tragic role in her life – she used to wear the brand’s clothes in the last months of her life. In February of 1962, she appeared at a press conference in Mexico wearing a green dress. In August of the same year, she was buried wearing that dress.

The most important thing is, Marilyn Monroe was self-made. She made herself by acting extravagant at times, and by being brave and bold. Not so many people stay iconic and relevant for so many generations. But it’s fair to say, personal style may help. You don’t need to make everyone drop their jaws on a day-to-day basis, but it sure feels nice to dress up for yourself. If you like what you see in the mirror, you inevitably become more confident and strong.

So dress up and enjoy the way you look!

The history of faux leather

The right accessories are capable of turning a simple outfit into the trendiest one.

Let's make a compilation of the fashion influencer looks to inspire you.

It’s never too late to change your style and become a fashion icon.