Vikisews Blog: 6 of the most iconic designs by Vivienne Westwood

Главная>Блог>6 of the most ic…

On December 29, 2022, the world said goodbye to Dame Vivienne Westwood, a British fashion designer, political activist, and “godmother of punk.” The world will remember her as a brave, audacious, and bright person.

Of course, books should be written about Vivienne Westwood’s long career in fashion, so it’s impossible to tell her story in one silly digest. But we still want to pay tribute to the legendary queen of punk by introducing you to 6 of her most iconic designs. Keep scrolling! 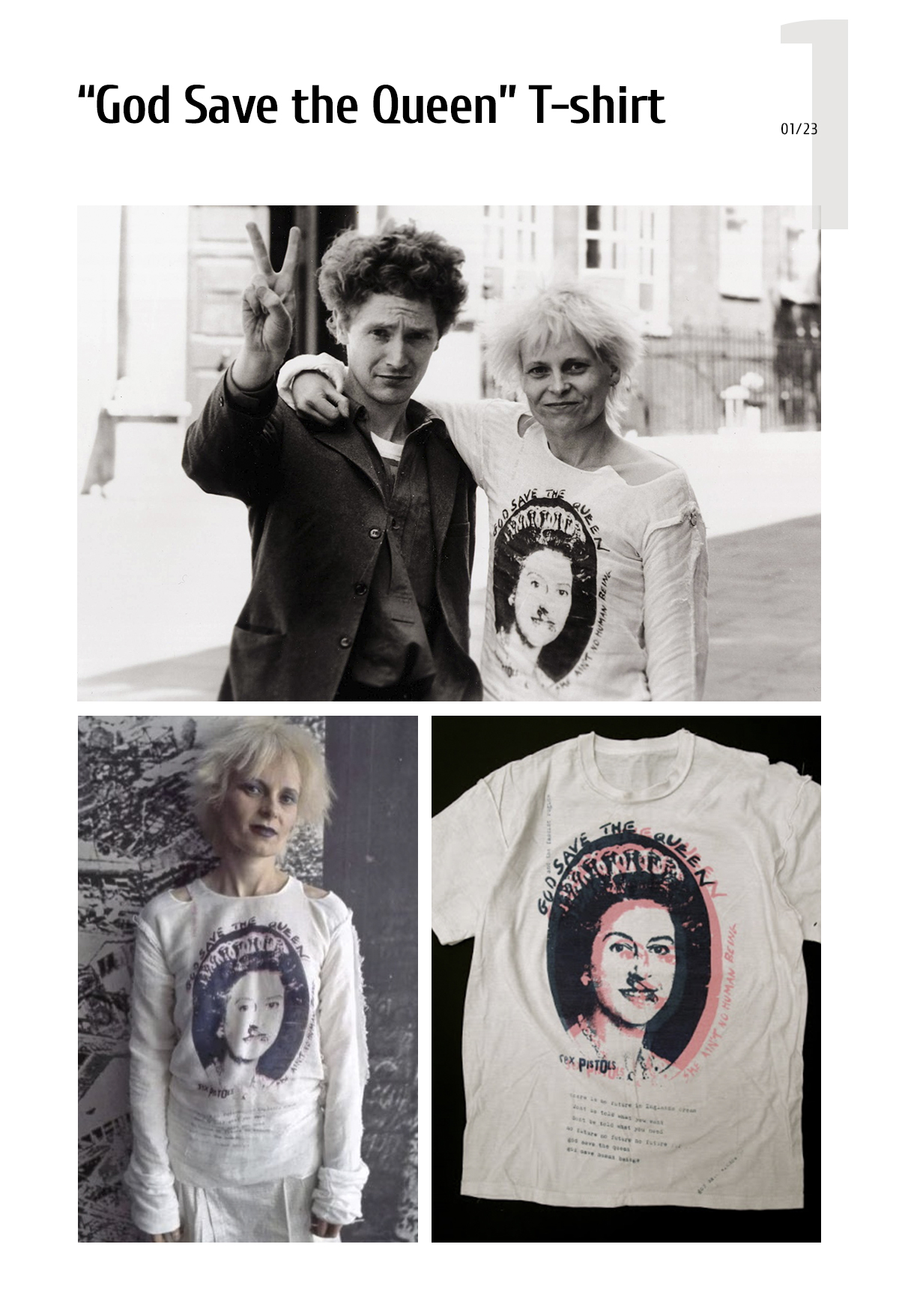 The “God Save the Queen” long sleeve t-shirt is the most famous clothing item depicting Queen Elizabeth II – and it depicts her with a safety pin on her face. Jamie Reid, the British artist and anarchist, reimagined the queen’s portrait for the Sex Pistols album cover, then Vivienne Westwood decided to put the picture on a shirt. This stunt could offend the queen, but surprisingly there was no outrage – the long sleeve t-shirt is now in the collection of the Victoria and Albert Museum in London. The museum also has the “Destroy” t-shirt – another iconic Westwood’s clothing item. 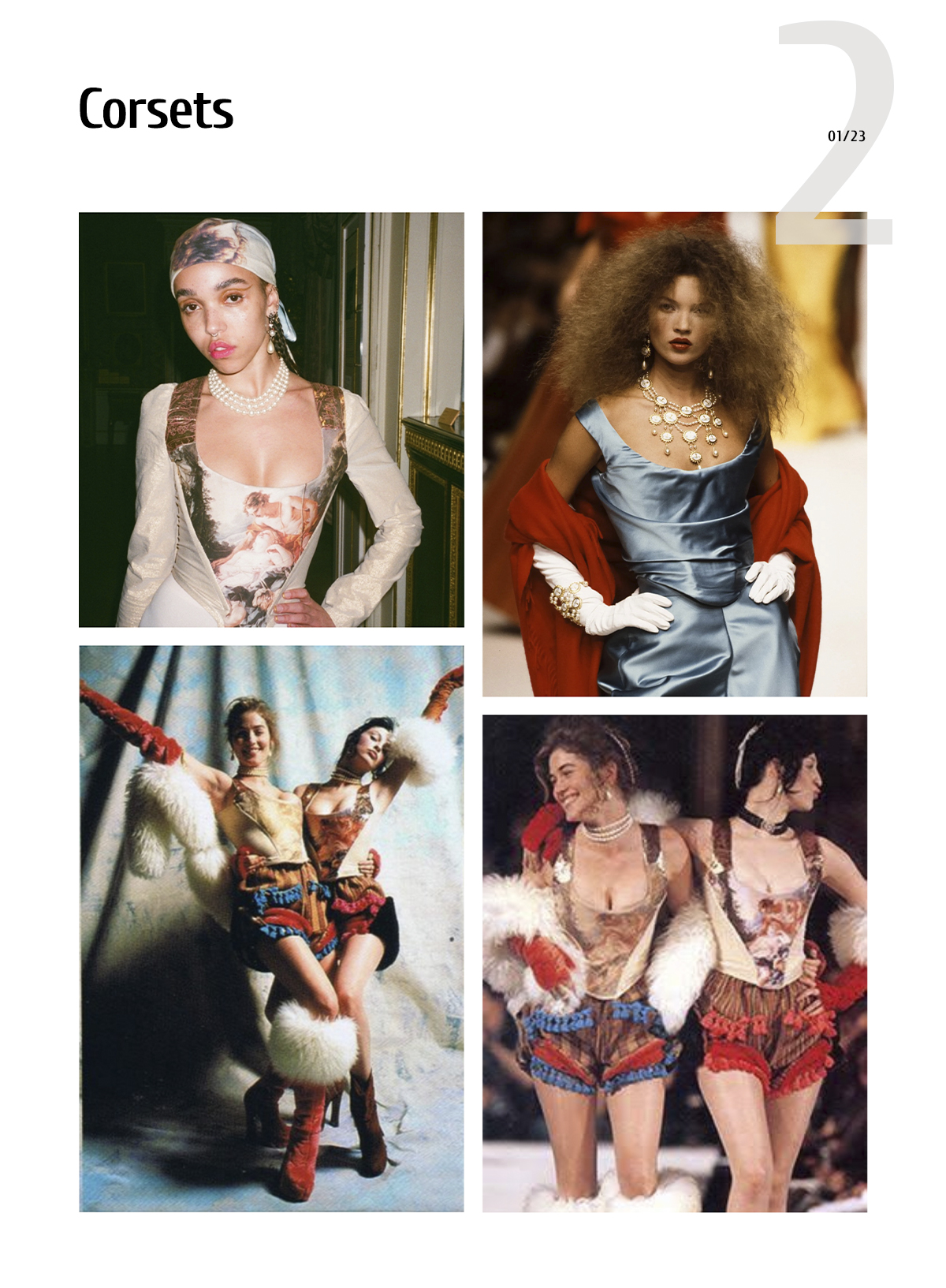 Vivienne Westwood had a great interest in historic costume design and would exquisitely combine antique design elements with modern style. She made the world see how corsets could become a part of casual wear. She singlehandedly reinvented this historical piece of clothing as far back as the 1970s, but the corsets from Westwood’s 1990 “Portrait Collection” became the most famous. 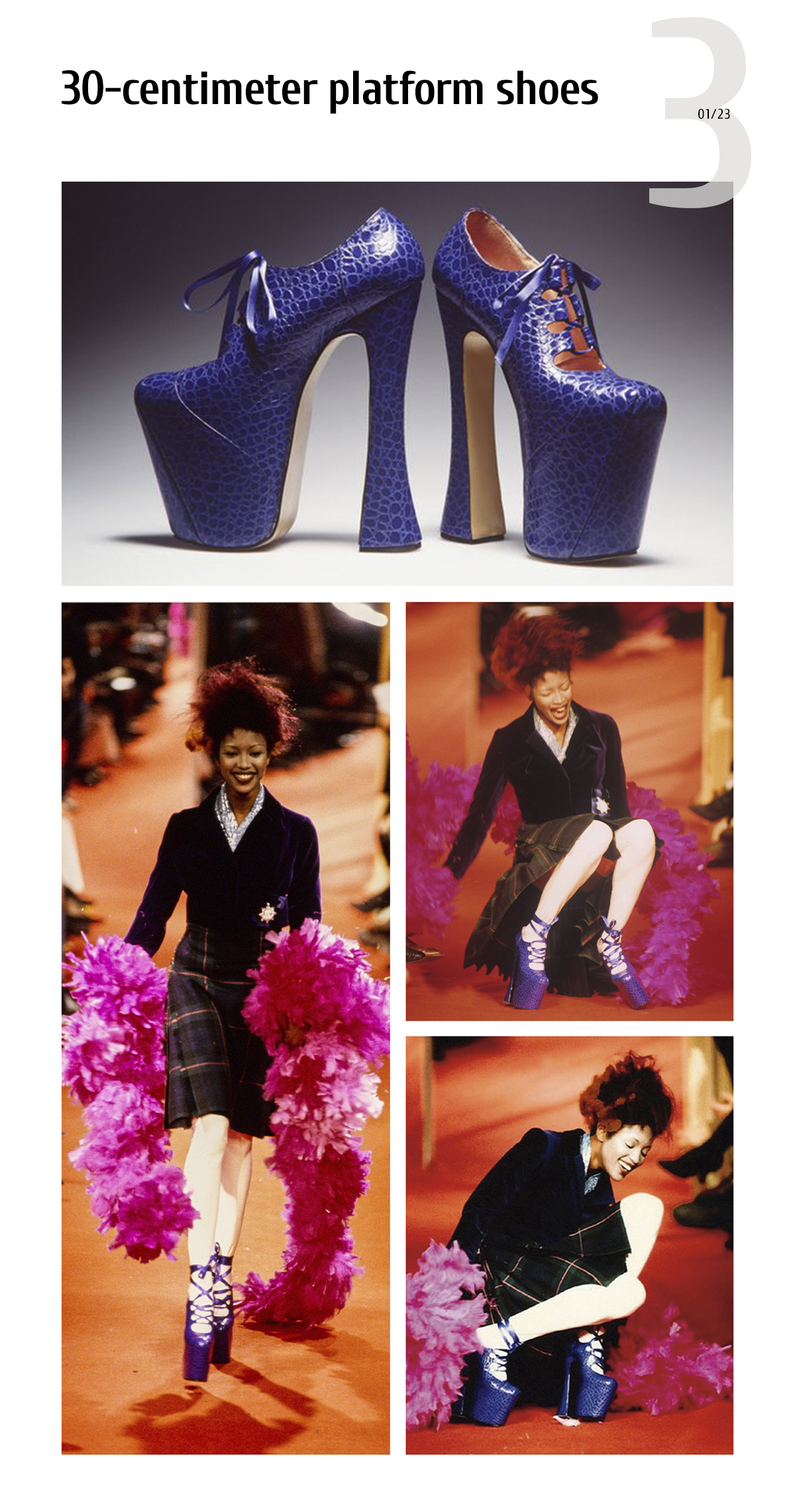 Naomi Campbell walking, or rather, falling during the Vivienne Westwood fashion show drew the public's attention to the event itself and to the 30-centimeter (12-inch) platform shoes she had on. You would think Naomi must have lost all of her contracts after this, but the incident, on the contrary, made her and the fashion show more famous. Later on, many brands actually asked the model to repeat the fall to get the same publicity. 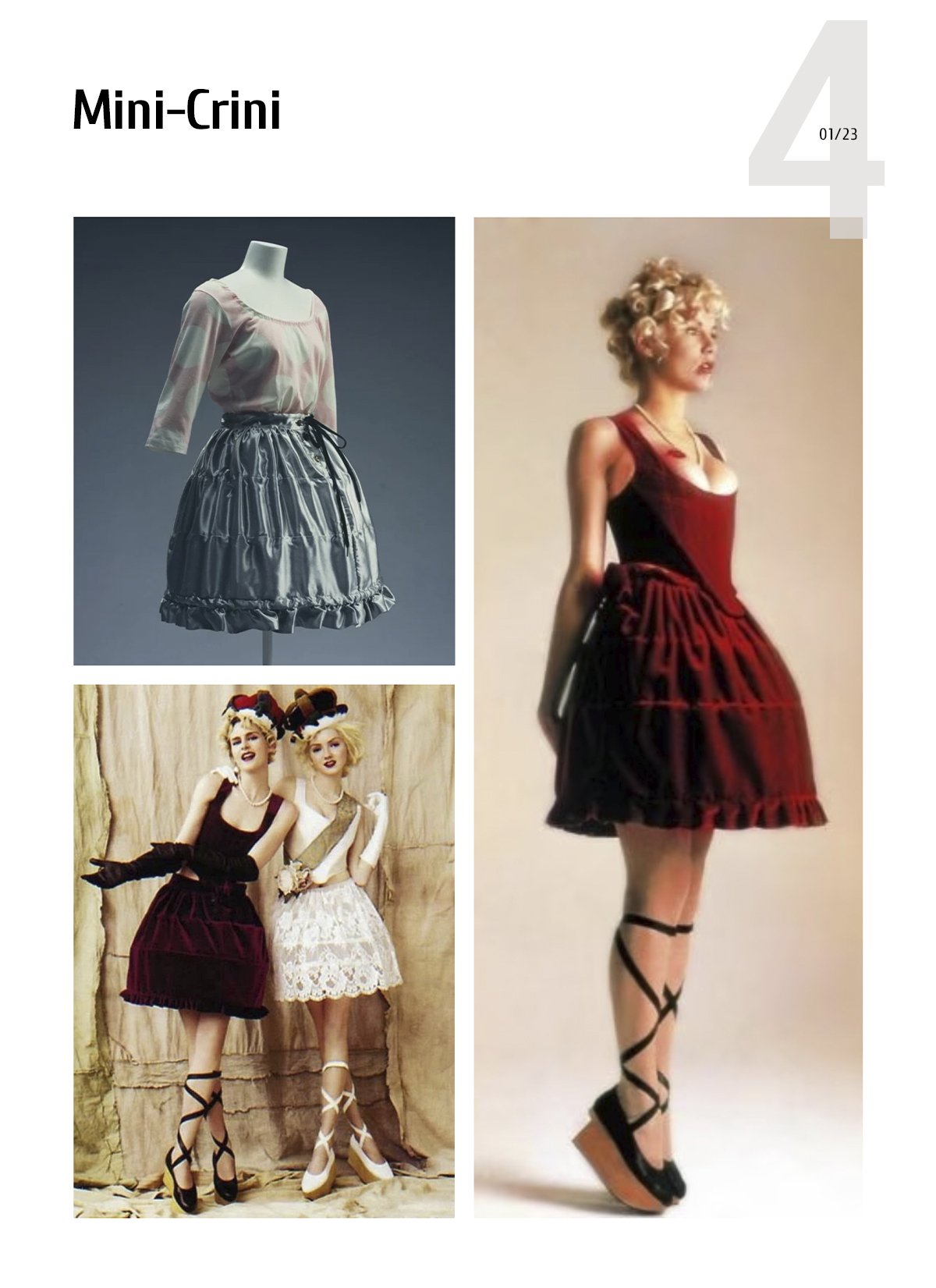 Mini-Crini – was the name of the Spring-Summer 1985 collection. Vivienne Westwood was inspired by Victorian fashion and combined the construction of the historical crinoline with the modern mini. The exposed underwear trend stems from this collection. 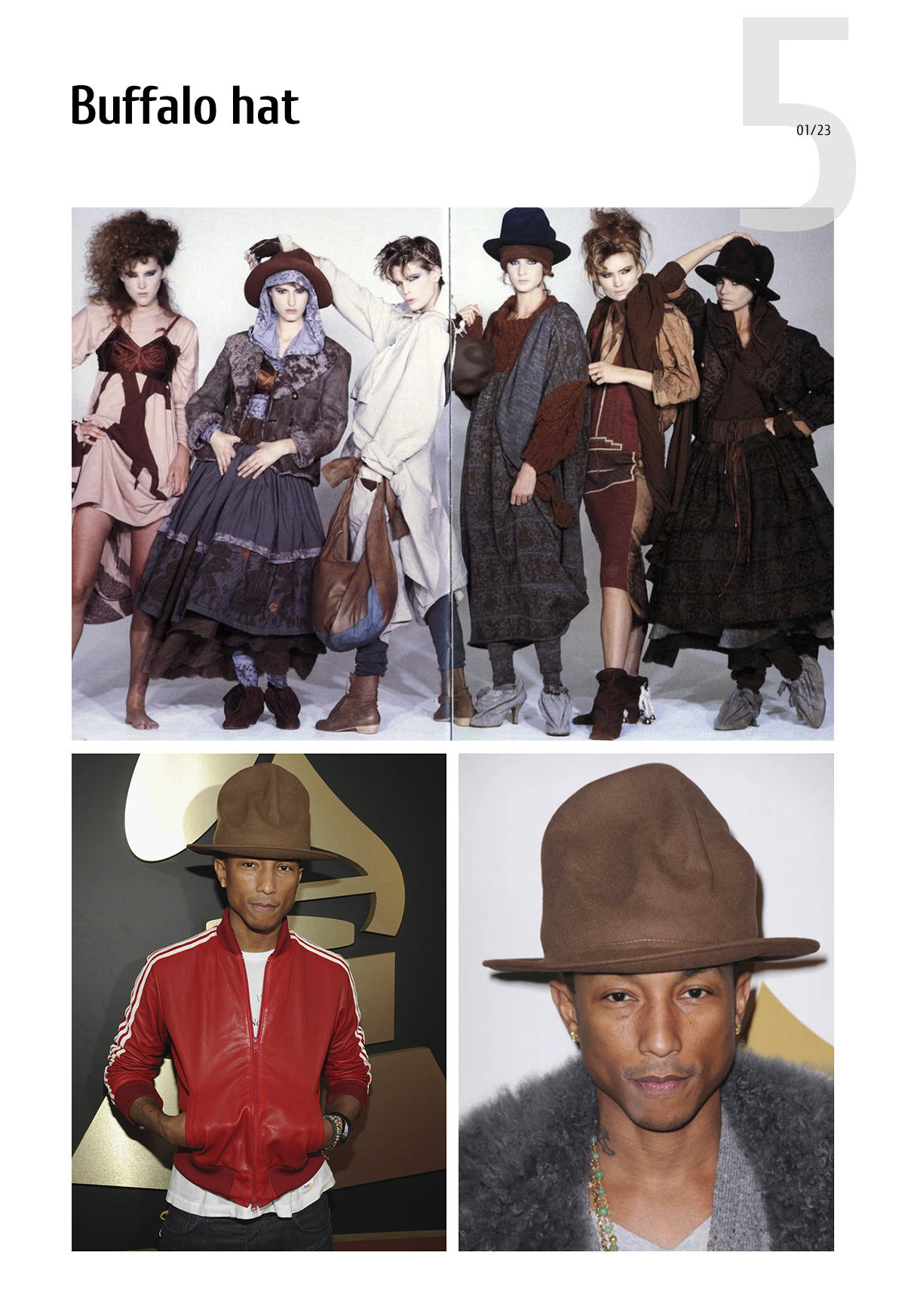 The Buffalo hat is a headpiece with a long fashion history. For the first time, Westwood showed the hat in her 1982 “Buffalo Girls” collection. However, the piece became immensely popular only in 2014 when Pharrell Williams wore it to the Grammys. 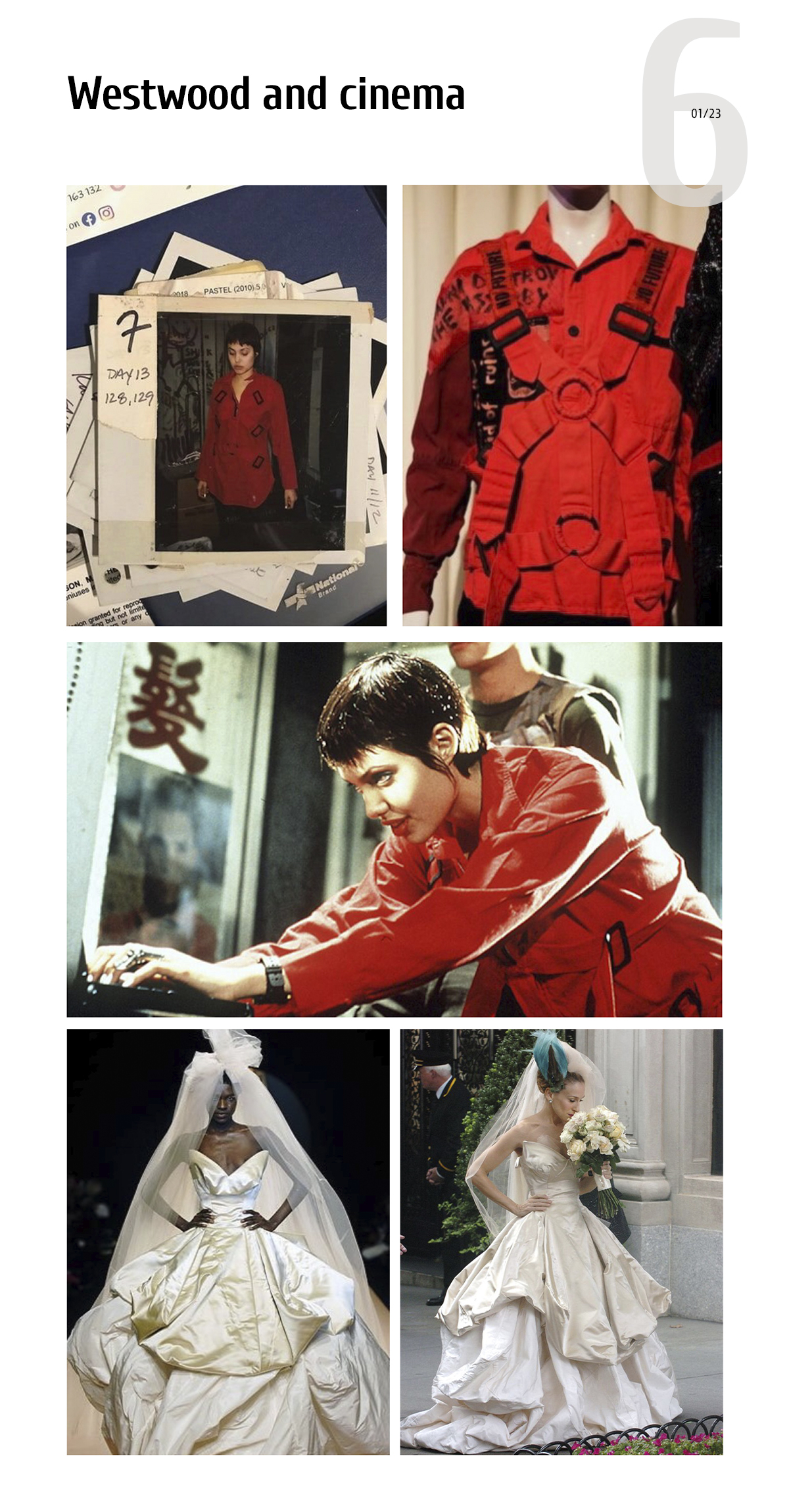 There are two items designed by Vivienne Westwood that have become legendary thanks to the cinema.

The first one is Carrie Bradshaw’s wedding dress – the one that Sarah Jessica Parker’s character wore in the “Sex and the City” movie sequel. In the story, Westwood gifts Carrie the dress after seeing her wearing it in the Vogue photoshoot. The dress was real – it was a part of the Fall-Winter 2007 collection.

The second one appeared in the 1995 “Hackers” movie. Angelina Jolie’s character is wearing the Vivienne Westwood red shirt embellished with faux parachute straps from the 1977 collection.

It doesn’t matter what the majority thinks of punks and their style. Vivienne Westwood managed to make punk aesthetic couture and rocked the fashion world with it. She was the fashion history geek in love with Victorian and Elizabethan fashion that she masterfully reinvented and deconstructed. Vivienne Westwood is no longer with us, but her genius is – no doubt – forever.

Raf Simons, bomber jackets, and collab with a 19th-century painter

Shows to binge-watch this weekend